June 3, 2016 marked the first anniversary of CenteringPregnancy at Grace Health. With CenteringPregnancy, women meet with their healthcare provider and other women with similar due dates throughout their pregnancy.  This first group included 9 women who were due around November.  The women spent 2 hours with their nurse midwife and nurse getting all of their questions answered plus they learned from the other women in the group by sharing their experiences.  The women also received a complimentary book regarding pregnancy.  CenteringPregnancy offers monthly visits for the first 5 months and every two weeks until the birth.  After the women had their babies, a reunion was held on December 30, 2015, with the women, their support person, and their babies.  The group got together at Grace Health for the 1st anniversary of CenteringPregnancy.  Although they have completed the program, the women still stay in contact with one another.  It has been found that CenteringPregnancy not only provides women and their support person with educational information about their pregnancy and what it expect, but it also gives them the opportunity to create lasting friendships.  What do our patients think about Centering?  “It is very helpful and a great way to meet other moms”.  Several patients commented that they liked having other mothers in their same situation to talk with and relate to.  One of the father’s said he would recommend it to everyone as a way to go through a pregnancy and receive prenatal care. 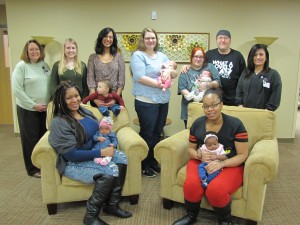 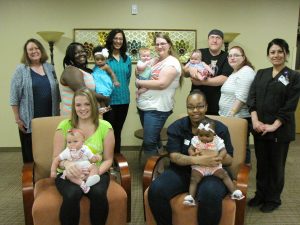