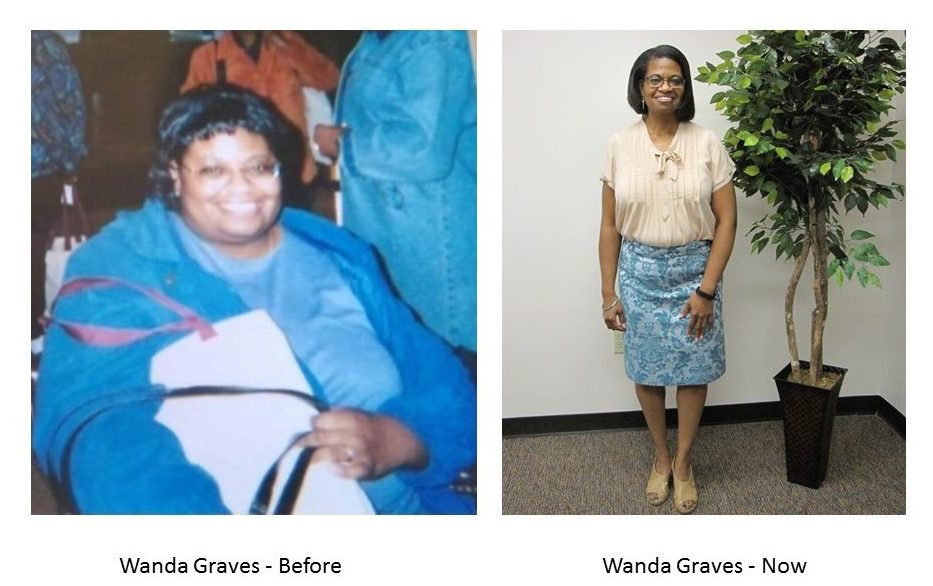 Wanda Graves tried several weight loss programs which worked for a while; however, she would eventually gain the weight back. In December 2010, she tried a new approach. Wanda Graves went to Grace Health and began meeting with Amy Dandenault, Holistic Health Educator. Amy taught her about small changes she could make to improve her health. The healthy lifestyle changes were done one step at a time – making the goal attainable rather than overwhelming. In the beginning, Wanda’s first change was to take the stairs instead of the elevator. Over the years, she has increased her exercise and can now be seen working out at the Battle Creek Y-Center 5-6 times a week. She recently participated in the Y-Center’s Healthier You Challenge and was a member of the winning team which helped her lose an additional 20 lbs.

Not only did Wanda start exercising, but she also learned about healthier food choices. During her meetings with Amy at Grace Health, Wanda learned what foods are healthier choices and adjustments that can be made so she can still go out to eat with friends. She now eats more fruits and vegetables. When asked what was one of the biggest changes she made, Wanda responded by saying she stopped drinking soda. Her choice of beverage is water and plenty of it. Besides not drinking soda, another big change Wanda made was exercise. In the beginning, she struggled to walk on the treadmill and could only use the elliptical machine for five minutes at a time. So she began taking Water Aerobics classes at the Y-Center where she found she could move freely without her weight causing discomfort on her knees and ankles. As she lost weight, she graduated to taking a Kettlebell class, weight training and other classes available at the Y-Center.

Since she began this journey, Wanda has lost a total of 77 lbs, going from size 26 down to size 10. Prior to her weight loss, she was having ankle and bone pain. Her bone density is now improved and the previous chronic conditions she had have turned around. Wanda is healthier, happier, and feeling good. Her health has improved and she no longer has to visit the doctor multiple times during the year. Wanda stated she hopes her story will encourage others. Weight loss and improved health is attainable if you take it one step at a time. Set goals that are realistic and achievable.